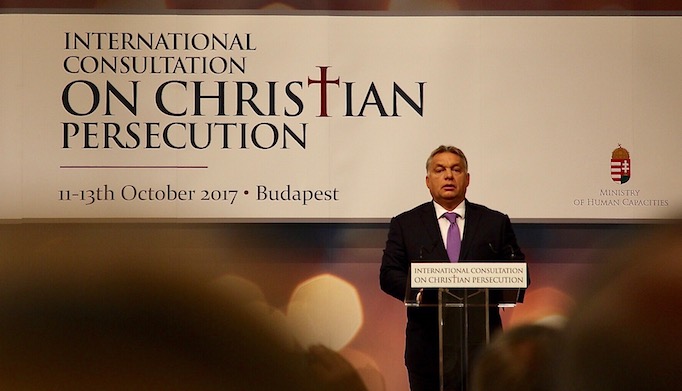 In 2016 Hungary’s government established a national-level office to support Christians suffering for their faith in Christ The next year, Tristan Azbej became state secretary for the aid of persecuted Christians and the Hungary Helps Program in the office of Hungarian Prime Minister Viktor Orbán.

In November of the same year, that office sponsored their Second International Conference on Christian Persecution in Budapest. They invited 800 of religious freedom advocates, as well as church leaders and victims of persecution.

Prime Minister Victor Orbán is criticized for many things, including his government’s focus on Christians. It embarrasses Western European diplomats, talking heads, leftist NGOs, and other spiritually dead secularists to hear anything other than euphemisms. Many only grudgingly add the most persecuted religious group of all, Christians, to their victim list. You could count on one hand the times that some Western speakers use the word “Christian” at some conferences literally organized to speak about Christian persecution.

Hungary is at the forefront of naming genocide against Christians as a “global phenomenon” and not a series of incidences or coincidences.

Hungary Helps is extremely efficient and streamlined. In part, this is because Hungary does not bother with such idiotic dilemmas as “could this support we are giving possibly be perceived as favoring Christians?” But also because of cutting edge technology, Hungary Helps has digitalized the aid process from application to dissemination. This ensures the utmost efficiency and speed of dispatch. The ICCP breakout session for NGOs featured a short video presentation of the Hungary Helps process.