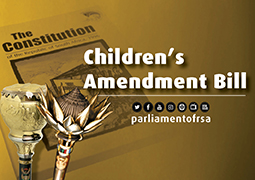 Other than the hate speech bill, there is the children’s amendment bill which has been adopted by both the National Assembly’s Social Development Portfolio Committee and the National Council of Province’s Select Committee on Health and Social Services.

The initial tabling of the bill aimed to make any form of physical discipline by a parent – no matter how light or well-intentioned – illegal and potentially subject to criminal prosecution for assaulting a child, to which there will be no defence in law.

Following complaints by some churches and other religious organizations, the Department removed the clauses proposing the criminalization of physical correction in the home. It is this Bill that Parliament has considered.

However, following the Constitutional Court’s ruling on 18 September 2019 that outlawed any form of physical discipline by parents, various organizations proposed substantive additions to the Bill that specifically deal with this issue.

However, the last version of the Bill that was public did not incorporate any of the changes.

New InnerCity Mission’s school to be commissioned in Ewu, Nigeria

Millions in Australia could face gas, power outages over next 24 hours as cold snap hits